The only blame that can be addressed to Wall Street firms is that they are all tightly regulated and that many were recently subsidized by government. In many ways, they have become arms of the state. On this, see my Somebody in Charge: A Solution to Recessions? (New York: Palgrave-Macmillan, 2011). Of course, the statocrats who tried to fill their financial roles in Soviet Russia, or those who do it today in China or Venezuela, are much less efficient and much more dangerous.

This does not mean that we have to love Wall Street figures, not more than we should love the ignorant lost souls who demonstrate under the latter’s balconies, nor the politicians and bureaucrats who reign over all that.

Liberty is as inconsistent with French-Revolution type of populism (especially after 1791) as it is with autocracy. Indeed, the first one naturally leads to the other.

A currency has no ideal price nor any ideal degree of “strength” or “weakness”. The more a currency is demanded by either foreign importers or investors — thus the more your country exports or is deemed to be a good investment place — the higher will be the price of the currency (assuming your country has a separate one, or a few distinct ones). This price, also called the rate of exchange, is as much a result of other economic activities as it influences them, just like any price is as much a result of supply and demand as it determines quantity demanded and supplied. But again. there is no ideal price. And note that exports are not more a goal, except for exporters, than working is the objective, except as a means to exchange the product of one’s labor for consumption (including imported) goods. 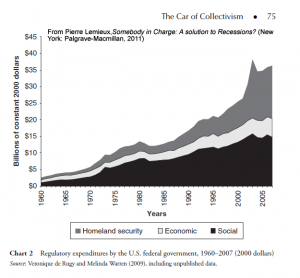 A measure of the evolution of federal regulation in the U.S.

And it includes only the federal government…

Why did the Great Depression start in the U.S.? One could think it was just an outlier, but the recent (and continuing) Great Recession suggests otherwise.

This phenomenon is puzzling, especially in light of a second one: for several generations, the American economy has been the world template for economic growth and opportunities. END_OF_DOCUMENT_TOKEN_TO_BE_REPLACED