At the end of November, Goldman Sachs predicted a short-term (over a three-month horizon) increase in the price of gold, followed by a downward trend through 2014. Accompanied by a new, bullish outlook for the American economy, this bearish forecast for gold made the financial news (see for example the Financial Times of December 7, 2012). Since then, the price of gold has been trending downwards, but things could change.

This sort of forecast raises interesting questions on the factors that influence the price of the yellow metal.

The heavy black curve on the figure below shows the variations of gold prices over the past few decades. The breakdown of the official peg of the dollar at $35 per ounce of gold in 1971 along with mounting inflation and unemployment brought gold to $675 in January 1980. Like other figures used here, this is a monthly average that hides some further variations: on January 21, 1980, gold reached a summit of $850. Then, with an improving economy, gold started a long, irregular decline until bottoming out at $256 in July 1999. It soon started moving up again, tripling by the fall of 2007. With the uncertainties of the Great Recession, it continued on the same path, more than doubling to $1,772 by September 2011. It has since fluctuated between roughly $1,600 and $1,800.

How gold prices will move in the future is of course impossible to know, but we can identify broad factors that will exert an influence. The higher the rate of interest, the less attracted investors are to an asset that yields no return like gold; the lower the rate of interest, the more attractive gold becomes. As interest rates are very low, they might be expected to increase (or at least not to drop further) in the future, dampening any bullish outlook for gold. Another factor is that investors view gold as a safe-haven asset, so that its price rises as the economic outlook worsens; conversely, it can be expected to fall if one is bullish on the economy as Goldman Sachs is.

There is another, more general lesson to be learned. It is important to understand that the price of gold depends on the demand for gold (given the existing stock of the metal), which itself depends on individual preferences. Ultimately, in the economy, everything is subjective. Prices change because people change their minds. In a deep sense, gold is no more physical or “real” than any other asset: it is what people think it is, and is valued as such.

Although the relative price of gold in terms of dollars and probably in terms of most goods is higher than it was in the early 1970s, a longer historical perspective would likely reveal goods that are now more expensive in terms of gold than they were at some point. In other words, gold can depreciate.

As Goldman Sachs suggests, the price of gold could fall again. My own guess is that it will not, or at least not for long, as the public debt crisis deepens and grips America. But the main lesson of the variability gold prices is deeper: although the yellow metal may (or may not) be a good potential anchor for money and an efficient restraint on Leviathan, it is certainly not an absolute standard of value and should not venerated as a fetish. 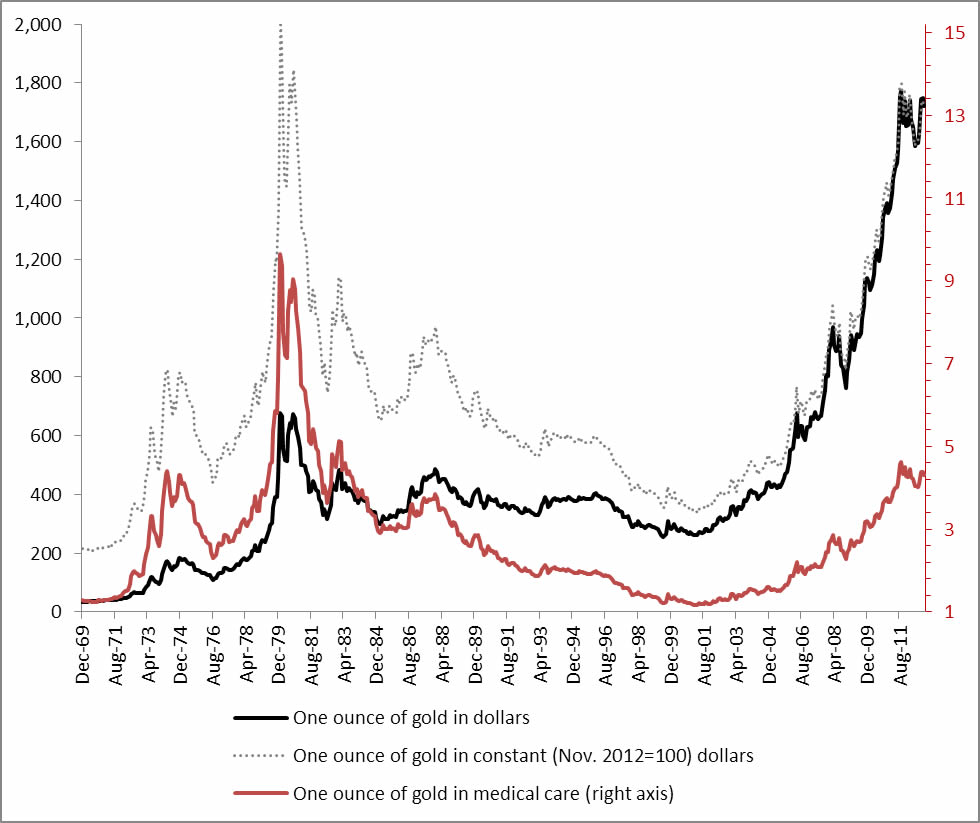